Those Things That Should Not Be

Part 1
In the World Egg there’s a crack
Through which monsters spill
Winged furies with gorgon faces
And black-dyed futilities
It’s an ugly scene
This fracture of mine
My rend in time
Spilling forth its manifold
Deceptions and delusions
A parade of those things
That should not be.

Part 2
The second act
Is proportioned along
The lines of ancient myth
Electra figures
Because geometry is keen
To find the right angle
The good type of danger
Sets the ransom high
If I have exposed too much
I apologise.

The third and final act
Calls for a costume change
Noir-ish tones and upturned collars, patent leather shoes
Awkward silence ensues
The young eaglet attempts flight
From its nest, anarchy
Looses its spiral conscience
Upon the fray of frayed humanity
What hope but the decisive
Judgement of the impartial
Judge of Ages
A return to chaos
Red screens of panic
And Act 1 repeats
(The players continue to
Listen in the dark…)

“And I Had Done an Hellish Thing…”

Now, I don’t profess to be an expert about this poem, not even for a minute. In fact, like with a lot of poetry, I tend to let the words simply wash over me and then form an impression of the poem based on what stays with me after I have finished reading.

Granted, it’s probably a fairly imprecise way of dealing with poems, but I am far more interested in poetic appreciation these days rather than deep contextual analysis and interpretation. Suffice to say, I’m content to leave such tasks to academics and their PhD students.

So, with that understood, I wish to now talk about what the title quote means to me, personally. Because I admit to currently being obsessed by the idea of having done “an hellish thing”, for which one must next do penance.

I can’t explain directly why this concept should fascinate me as much as it does. I mean, it’s not like, for instance, that I’ve done anything particularly hellish myself ever. Well, not in this lifetime, I’m pretty certain.

However, as a case in point about my obsession, when it came to my writing a novel, I chose for some undefinable reason to write about the defunct Antichrist’s search for a personal moral compass and eventual redemption, in a world long gone to hell. And, surely, there exists no more hellish figure than that, obviously other than Satan himself.

So, do I identify with this figure, then, somehow? This most evil and unforgivable agent of the apocalypse? Is that what is going on here? For why else would I have spent all those hours writing a novel about such an odious character?

And, I suppose, therefore, the answer to these questions must ultimately be, “yes”. Essentially, I see something universal about the figure of the Antichrist. There is something of the Antichrist in each and everyone of us, I would suggest. But let me explain, first, before you object.

OK, for me, then, this is the meaning behind the Rolling Stones’ lyrics to Sympathy for the Devil, where Mick Jagger sings,

‘I shouted out,
“Who killed the Kennedys?”
When after all
It was you and me’

You see, we all carry the burden of guilt for hellish things that are done in the world, even when those things are done ostensibly by others. If there is evil in the world, it is the responsibility of each and every one of us to identify our own individual share in this evil.

Women and children are being killed every day in foreign war zones. And if you live in a Western democracy you must accept that a certain percentage of these innocent civilians are being killed in your name. I’m sorry to say it, but it’s true. Even if it’s happening on the other side of the world, in a country you can’t find on a map. It is a sickening fact you can’t truthfully deny.

Whether we like it or not, we all carry this guilt, just like the Ancient Mariner, who had the body of the albatross he killed tied around his neck, as penance.

And you know what? It stinks! Sure, some of it is simply middle-class guilt, I’m describing. A privileged form of despair, if you will. But, deep down, anyone with even a scrap of conscience must concede that our lives are ultimately built on the suffering and exploitation of others.

I understand it’s not a pleasant message I’m putting out there. But I honestly believe it to be the truth. Likewise, with the novel I wrote. It may not have the most pleasing literary style or even a heart-warming narrative, but it seeks to tell it like it really is. Not how we like to think things are, but how they are below the sanitized surface of political correctness.

But why? Why would I intentionally set out to remind people about what miserable wretches we all are? Why, indeed…

Well, anyway, let me tell you why. Because I have done an hellish thing, and this is my penance.

4 Comments   |  tags: Lorem Ipsum, missing zero, penance, redemption, Rime of the Ancient Mariner | posted in Musings on the Meaning of Life, Spirituality and other imponderabilia

And my pen
Does it desert me
Just when it should
Serve me best
With a stream of words
To allay my thirst
Calling to mind
Weekends spent away
With friends in autumn
Haze of russet leaves
And hot mulled wine
Cast adrift amidst carefree
Half-remembered rhymes
Would that it should
Still sustain me so and
This sword of Damocles
Remain the weaker foe.

IMHO — Good or Bad, Opinions aren’t Worth a Damn

As artists what we create is art; what others then think of what we create is merely opinion. Good or bad. Everyone is entitled to having one, sure, but opinion isn’t an absolute judgement. Opinions change. What passes for brilliant or, alternatively, banal can quite literally change overnight, due to the vagaries of public opinion.

Critics, professional or those of the self-appointed variety, are typically seen as having some greater insight into the true worth of a work of art. But this is equally suspect. For, ultimately, the judgement of critics is simply opinion masquerading as fact, in an “Emperor’s New Clothes” sort of fashion. Pardon, the pun.

So what are opinions? After all, we’ve all got one, on pretty much every subject under the sun, don’t we? But what are they?

The answer? Everything and nothing. To receive a glowing review or peer endorsement feels like everything, sure. As does the crushing dismissal of one’s artistic merit by some so-called expert. Yet, essentially, opinion can’t alter the inherent value or validity or very “is-ness” of an artwork, be it a painting, photograph, poem or a long work of prose.

In the end, maybe this is the core meaning of the phrase “art for art’s sake”. For is it possible that, once the need for another’s opinion (negative or positive) is removed, the artist is free to create whatever he or she wishes to, without deferring to opinion polls and fickle public consensus?

Hey, don’t simply listen to my thoughts about this idea, though. Take it from someone with far more impeccable artistic credentials than I…

“Don’t think about making art, just get it done. Let everyone else decide if it’s good or bad, whether they love it or hate it. While they are deciding, make even more art.”
― Andy Warhol

A Feast of Words

When all the traps are baited
And the snares precisely set
The hunter catches
A guarded hour of rest
He drinks a bowl of wine
And chews the rinds of time
Waiting for the kill which
Brings deferred completion…
Death’s release from
Earthly bondage
With boldly-blooded mask
The huntsman’s art
This primal, sacred task.

From its branches
Hangs every answer
To those questions
Nocturnal minds
So want answered
The bat-winged queries
And owl-hooted theories
As well as Nightwood
Wishes past
From deep within
Its bark of darkness
The Tree of Dreams
Sends forth roots of starless
Meaning to set the minds
Of dreamers’ reeling
Until daylight hours
Should dispel the shades
Of our soul’s truth
Fast retreating.

In a future “brought to you by Future-corps!”
We’ll all be spoilt by choice
With our every happiness catered for
“Thanks to the Great Almighty Omni-computer’s infallible recognition of voice!”

Every father replaced by a gameshow host
Every mother charging a celebrity fee
We’ll call an assorted host of electronic ghosts
Our closest friends, before dialing in the required level of empathy.

That is, save for those few driven underground
In search of what once was old sprung fresh anew
Souls still hungry for another’s touch
In lieu of patented, pre-fab toga/wedding parties
And holographic (pay-per-view) thought zoos.

Water is an Orphan

More rain
And scones with
Rosemary, danced under
A tree, with John
That made three
This our surrogate family
Of mum, dad and me
Together we sing
It’s a hard-luck life
Before I dry my
Eyes from laughing
So hard, now
Wet through.

The cautionary tale of Icarus, the young man who rashly flew too close to the sun, is of course known by all. In fact, the image of this tragic figure of myth, who by way of his ill-considered actions doomed himself to a watery grave, is so deeply etched into our collective imaginations so as to have become a universal archetype of impetuous youth overreaching its limits.

What is not dwelt upon, quite so much, however, in the telling of this tale, is the fact that Icarus can alternatively also be viewed as having been one of the world’s first test pilots. For, quite literally, he boldly went where no man had gone before.

From this viewpoint, then, Icarus can be seen as having possessed the “right stuff”. He tested the boundaries of physical human endurance and paid the ultimate price. A price that any test pilot worthy of his wings is more than willing to pay, in pursuit of “pushing the envelope”.

In its symbolic sense, the myth of Icarus, I believe, is so compelling to us artist types, precisely because of his fearless, trailblazing attitude. For, simply put, there can be no creation of breathtakingly new and original artworks, without one’s first flying in the face of tradition.

The danger, obviously, is that the artist will next suffer a tragic fall, like Icarus himself did, if he or she should try to overstep the limiting boundaries of societal consensus and norms by too much.

But, then again, I would argue, there exists those kind of days, as an artist, when you just need to suit up and say, “Stuff it, set the controls for the heart of the sun”. Those make or break days, when all thoughts of failure are dismissed as irrelevant. Those days, when you feel you must — even though it goes against your better judgement — reach into the fiery crucible of the sun and drag forth a molten ray of destiny and claim it as your own.

I call them Icarus Overdrive Days, and I can only pray whenever they crop up that I’m able to find the write stuff within me to ride them out. I suppose, half the fun in a myth, though, ultimately lies in its making…wouldn’t you agree? 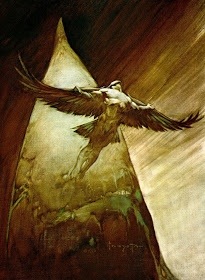 With a much diminished
Poisoned 5th
Of jealous whiskey
On blue lips
He breathed his last
Tritonic breath
His Master’s voice
The harbinger of death.

An idle deal of youth
At midnight made
The price of fame
An unmarked grave.
The Devil tuned
His first guitar
He gave his soul
To play 12 bars.