Confessions of an Inverse Snob

Just recently I had the opportunity to meet one of the heroes of my youth. And while both of us may have aged somewhat over the last 25 years, it was still a real buzz.

The hero I’m referring to is Joe Satriani, and believe me he is still very much at the top of his game.

For those of you who don’t know of whom I speak, it is probably easiest to describe Joe as being the ultimate guitarists’ guitarist. He can do things when he plays that causes mere mortals like myself to question why they ever bothered to pick up a guitar in the first place.

I do believe the Devil himself would sell his own soul to be able to play as well as Joe (or Satch as he is known to his legions of fans).

But enough. I could enthuse about Joe’s mad skills forever. However, that is not my intent. Because what I really wanted to focus on here was the man himself.

You see, in person, Joe happened to be everything you would want your hero to be: humble, polite, very centered and totally inspiring. And I know all this from a quick handshake and a brief exchange of words as I got my photo taken with the great Professor Satchafunkilus

So what of it? I hear you ask. Well, I suppose, this is meant to serve as a confession of sorts. For as much as I am ashamed to admit it, I didn’t conduct myself in a totally dignified fashion throughout this fleeting interaction.

The problem was that I initially approached meeting Joe with the wrong attitude. I thought he would be all aloof and dismissive with me, his being world-famous and all. And so, I therefore acted like an “inverse snob”, sort of almost snubbing him before he could snub me type-thing.

Fortunately, his gentle, zen-like demeanor cut through all my crap real quick. And that’s when I realized it’s not always enough to be the very best at something. Because if you’re going to rise to the top of whatever it is you do, you’re also going to have to learn how to deal with other people on a major scale. Something which is an entirely different skill set again.

Anyway, that was my recent celebrity encounter and subsequent bout of self-analysis. And so now I wonder if any of you have had a similar experience? And, if so, what did you take from it? 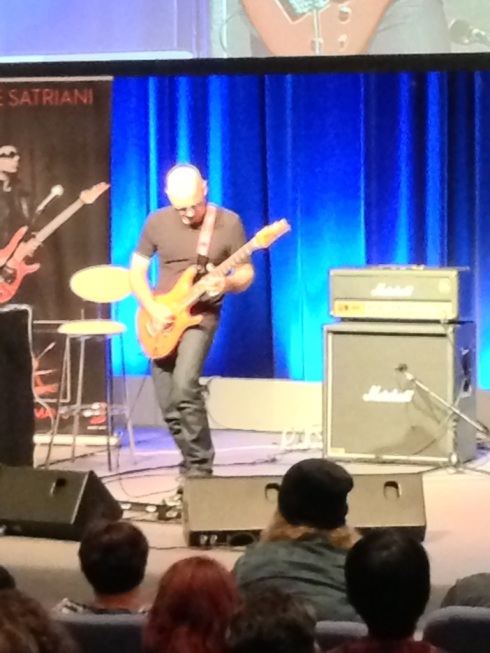 Just some guy trying to figure out where the "on" switch is hid on the remote control—ah, forget it. Because, you know what, I'm also the kinda guy who always likes the book waaay more than the movie! END_OF_DOCUMENT_TOKEN_TO_BE_REPLACED
This entry was posted on Friday, April 26th, 2013 at 3:29 pm and tagged with celebrity heroes, guitar, Joe Satriani, Lorem Ipsum, missing zero and posted in Guitar stuff, Popular culture. You can follow any responses to this entry through the RSS 2.0 feed.
« Human, All Too Human — Putting Into Words What Makes Us Who We Are
Man’s Work »

14 responses to “Confessions of an Inverse Snob”